Create an Account - Increase your productivity, customize your experience, and engage in information you care about.

A Storied History
Sugarloaf came by its name because its shape reminded early hunters and pioneers of the sugar loaves common in those days. A Swiss explorer, in 1707, sketched the earliest known map of the mountain. A written account, penned 5 years later, described a plain atop the mountain and the delicious chestnuts grown by the trees on its flanks.

General Braddock, commander of British troops during the French and Indian War, marched his men past the mountain in 1755. Northern and Southern forces alternated in posting lookouts at its summit during the Civil War. Brave wounded and dying soldiers were hospitalized in a log cabin that still stands at the mountain's foot. 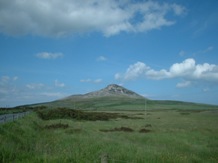 Visit, Hike and Enjoy the Mountain!